YouTube Update!
Things are happening at YouTube. Software is being updated with a new look, buttons are being moved around and everyone will have an unique handle. At this point, I have 114 subscribers now and a Community tab. I was hoping to get the Discussion tab back because I was hoping to have my own forum there. As many of you know, I've been a moderator at a homeschool forum at a defunct website called Old Fashioned Living, and have participated in two other forums at Club Posh and Splitcoast Stampers. I posted a photo on my Community Tab - check it out!
My original YouTube URL will still work - https://youtube.com/c/DoloresJRush
but my new one will reflect the changes happening at YouTube = https://youtube.com/@DoloresJRush
Hey educators and homeschool mamas! Remember giving pop quizzes in social studies? Well, I just uploaded one this week that pertains to Missouri and Kansas history. See how many you remember. I give clues on my History Nut of Missouri blog - check the side menu on your computer or mobile phone in internet web mode for the answers.
~ ~ <> @ <> ~~
Originally posted on: Friday, July 8, 2022
Rejoice with me! I made an YouTube milestone! I have 100 subscribers! Never thought other people than my friends would enjoy watching my content. Boy was I surprised when I received an email from YouTube last week stating I had reached the 100 subscriber mark. 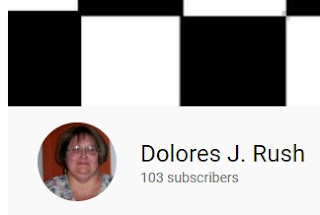 I really enjoy the video view counts and the comments because I would love to build a little community there, you know like an old-fashioned internet forum! I know how the subscribe button works. It has a little notification bell that works three ways -- 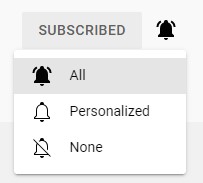 When you click on the Subscribe bell, the little black bell level will notify you of all the videos I upload. The white bell means that you get notified once in a while when I upload a video and the slash bell can be used just to bookmark my site, but you won't get notified when I upload a new video. I know life's busy, but I would like it if my subscribers were regular watchers if at all possible. I used to be a moderator of the Parlor forum at the defunct website Old Fashioned Living and have been a member of two other forums at Splitcoast Stampers and Club Posh and now I have my own blogs. I miss that forum discussion part at YouTube. My video is like the beginning of a forum thread and the comments below are the discussion part of a thread. While I like praise, I also like chatting with friends. The internet has been great for making new friends, people I probably would never have met in my physical world.
Let's party! YouTube Celebration video! Join the subbies rejoicing with me below in the comments! Woo Hoo! Thank you for subscribing to my channel!
My youngest sister-in-law picked up this plaque at the Crackerbarrel restaurant gift shop last week to show me and we both laughed. 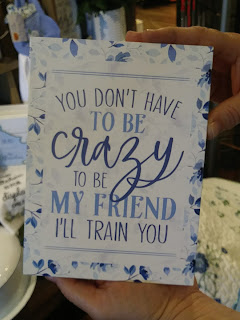 Then I took a photo and sent it to a friend from my homeschooling days. I told this friend a few days before SIL found the plaque above that I sometimes feel like a square peg in a round hole and she told me that we can be Square Sisters together. smile! So, if you don't mind a kooky friend, come on over and subscribe on the black bell if you have a mind to and jump right in and make a comment. That would make my day special!
Posted by Rushd Lady at 12:00 AM No comments:

My last Doodling through the Bible video, I used this book to learn from and the author has many more ideas for making black and white designs. 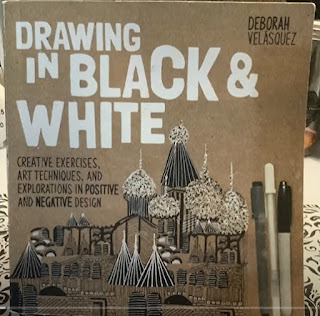 Am I a Gudrun Girl? Yes and No!

Yes, I'm a Gudrun Girl as far as her fashion line goes!


When I was diagnosed with drop foot several years ago and a leg brace was added to my wearing apparel, I discovered Gudrun Sjoden's clothing line on Pinterest. Just what I was looking for. Leggings plus fashionable, comfortable wearing apparel. I loved her bright clothing in the patterns I like most - calico type florals,  checks, dots, and stripes.

No, because her clothing does not come in my size.

So, I emulate her fashion as far as I am able. I do like black and white the most and so far, that's about all I've been able to find, clothing wise in my size that I can afford. I shop for my clothing at  1/2 of 1/2, thrift stores (have a couple of favorite spots), Walmart, and if on clearance or sale, online at Full Beauty Brands. Occasionally, friends will give me a bag of clothing if they know my size or accessories they think looks like me. 😁
Two other pluses that I had never thought of before until I discovered her clothing line was that you can wear a short sleeve dress all year long and then layer it during the winter. First time I was actually warm enough during the winter in my drafty old farmhouse cottage. Second is that you can wear different patterns together at one wearing, if you keep the clothing and accessories in all the same basic colors.

The layering during the winter can be not only sweaters, but also long sleeve t-shirts over or under a dress. Long sleeve t-shirts can make a dress appear to be a skirt under the shirt or if you wear it under the dress, the dress looks like a jumper. Also what we used to call culottes,  can be worn over a pair of leggings and under a short tunic dress for another layer. You can wear decorative infinity scarves in the winter to keep your neck warm and necklaces in the summer to keep your neck cool.

So when I began to build my wardrobe, I chose seven (7) colors that go well with black - black and white, black and grey, black and red, pink, turquoise and lime green. I also chose 4 of my favorite patterns that I mentioned above. However, after shopping for several years pink, turquoise and lime green were hard to come by, so I've changed my colors again. I've kept the black and white, but also added red, white, and blue. Teal was the easiest blue-green color available, but it's not my favorite blue-green. Teal is on the green side of blue-green and turquoise is on the blue side.  So far, it's been easier to find the red, white, and blue, but I usually discard the garment if the fabric also has another color beyond the ones I have chosen, because I don't want to throw in another color into my mix.
I pulled out everything in my closet and anything that didn't go with my colors or pattern choices went to the thrift store for somebody else to enjoy. It has taken some time to build up my wardrobe.
I do have one piece of Gudrun Sjoden jewelry. No, it's not a necklace. See if you can spot it in the photos below.  Click on the photos to enlarge them. 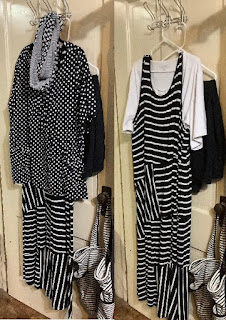 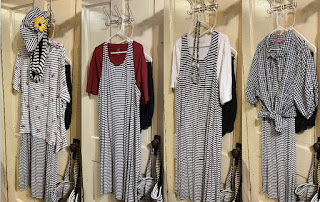 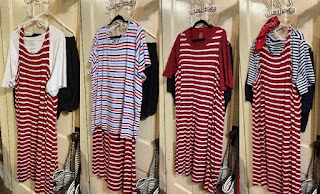 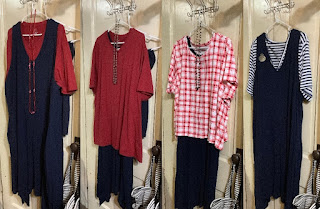 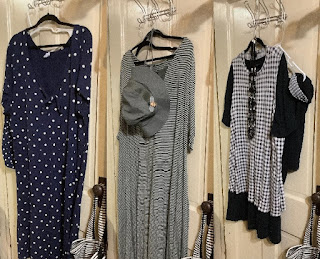 These are just a few of my favorite dresses. See how I can mix and match shirts with the tank/jumper dresses. I'm constantly scouting out apparel and accessories when I go shopping.
And, my wardrobe may be doing some more changing in the near future. According to google, you must lose 10 to 15 pounds (about 1 stone, UK measurement) to change clothing sizes and I've lost nearly 25 pounds since the end of January. I'm currently on four medical diets - Possum Patty calls it the Freedom Diet - sugar-free (hypoglycemia), fructan-free (low-fodmap), caffeine, carbonation, citrus, dairy, mint, garlic/onion, tomato-free (GERD/gastritis), and soft foods (gastroparesis). It's been a balancing act, let me tell you. Just because it's gluten-free, doesn't mean it's sugar-free, but I let myself have a treat ever once in a while.
✿✿✿
Posted by Rushd Lady at 11:57 PM 2 comments:

Rushd Lady
I like genealogy or history and crafting, so I'm a sentimental romantic and self-taught creative with a degree: "MRS." in domestic engineering, am a former Sunday School teacher and homeschooled our special needs son, now a 30-ish young man.

Thank you for following my blog and. . .

Last Day of February is...

Arts and Crafts Keeps ME Sane